07 May 2021 – Leading Classification Society ClassNK has issued an Approval in Principle (AiP) to Kawasaki Heavy Industries, Ltd for the design of a cargo containment system (CCS) of the world’s largest capacity (40,000 m3 class per tank) developed for use on a large liquefied hydrogen carrier.

Hydrogen is expected to be used as a clean energy source to realize a decarbonized society as its burning does not emit CO2. To contribute to the maritime transportation of hydrogen, which is anticipated to expand its use worldwide, in 2017 ClassNK published the “Guidelines for Liquefied Hydrogen Carriers” describing the safety requirements for liquified hydrogen carriers based on IMO’s Interim Recommendations for Carriage of Liquefied Hydrogen in Bulk. Besides, ClassNK has engaged in the classification survey during construction of a pioneering liquified hydrogen carrier, SUISO FRONTIER*1, of a 1,250m3 carrying capacity built by Kawasaki according to its rules and guidelines.

Having received an application from Kawasaki, ClassNK carried out the design review of the newly developed CCS*2 for a hydrogen liquified carrier based on its Part N of Rules for the Survey and Construction of Steel Ships incorporating the IGC Code, and its guidelines incorporating the IMO’s interim recommendations. In addition, a comprehensive safety assessment of the CCS was conducted based on the HAZID risk assessment results, which has led to the issuance of the AiP.

The main features of the CCS announced by Kawasaki are as follows: 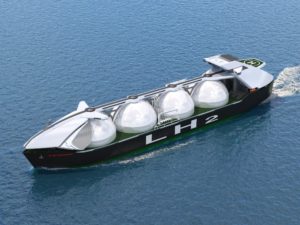