Prince’s death, so soon after Bowie, makes this a bad year so far for two of my wife’s Holy Trinity, but not for their estates. Iggy Pop – the last in the triumvirate – is currently in rude good health, although his latest album is showing few signs of commercial life.

Shipping and mainstream fame can be uneasy bedfellows but marketing those joining the choir invisible is bigger business than ever, meaning that even this most conservative of industries is on board, as plans set out by Cunard for Marilyn Monroe last week confirm.

Rights related to Elvis continue to earn an estimated $55 million annually for Authentic Brands, almost forty years after the King caught that last mystery train. Fellow Authentic icon Marilyn is slacking at a paltry $15 million a year, but a new costume exhibition on board Queen Mary 2 demonstrates that there are other ways for the dead to make someone a living. 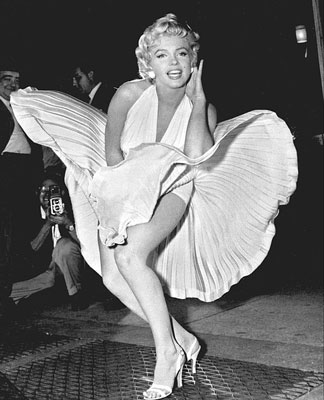 The ‘homage to one of the world’s greatest Hollywood icons’ will be installed in time for QM2’s Transatlantic Crossing, 9-16 August 2016, and cruisers aboard can not only view items – they can bid for them, courtesy of Beverley Hills-based Julien’s Auctions.

The ‘Auction House to the Stars’ is acting for private collector David Gainsborough-Roberts, who has been amassing all things Marilyn-related for over 25 years. The exhibition, which includes clothing worn by the siren on screen, is actually one leg in a world tour for ‘The Marilyn Monroe Collection’ before its owner puts his haul under the hammer in November.

Cunard is actually consolidating QM2’s position as a floating showcase for a memorabilia industry sprinkled not only with stardust, but hard cash. The cruise line’s tie-up with Julien’s even offers a chance to gauge its morbid progress.

In 2008, the Bob and Dolores Hope Charitable Foundation raised $608,000 through a sale of memorabilia following the collection’s preview voyage on board the luxury liner accompanied by daughter Linda Hope. In 2012, Garbo memorabilia crossed the Atlantic on QM2 accompanied by great nephew Derek Reisfield, with a subsequent auction of 853 items in Los Angeles including clothing and jewellery generating $1.6 million.

This time, relatives appear to be in short supply, but the flamboyant Gainsborough-Roberts will be on board to participate in a series of Q&As. Hopefully, the collector will be asked about the source of pre-auction reports that the full Monroe collection is ‘worth’ $10 million; he is on record as saying he paid around £500,000 for it.

Perhaps it is only a matter of time before an Elvis cat-suit or two lumbers aboard QM2 en route to the auction house, given that Julien’s recently auctioned off two private planes, a tour bus, a 1971 Stutz Blackhawk, historic contracts, and even some prescription drugs canisters. As ever, no doubt, someone will be TCB [taking care of business] on the King’s behalf.

Editor’s note: Barbra Streisand, who auctioned off memorabilia after a preview voyage of the collection on board QM2 in 2009 with proceeds going to her own charitable foundation, remains distinguished by being very much alive. But then she always was a funny girl.