If you’re going to invest money in advertising your business in trade publications (otherwise known as business to business magazines or B2B) there are many things to consider. The obvious and principal among them is selecting publications that are read by as many of your potential customers as possible.

Companies in any specific trade generally know from experience the publications that serve their industry; they might read them themselves, see them at trade exhibitions / conferences, come across them in customers’ offices etc. etc. but when it comes to choosing those in which to invest your precious advertising $ you need to take care to select only publications that reach the largest number of your potential clients / customers.

All publications issue annual ‘Media Packs’ which are, effectively, brochures that describe themselves, their editorial programmes for the forthcoming year, advertising rates and production data and, most importantly, their distribution numbers and breakdown. 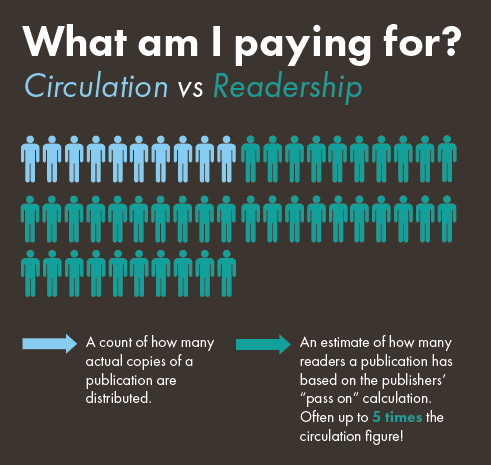 Immediately important to note is whether the publishers are presenting the distribution of the publication as Circulation or Readership.

Circulation is a count of how many actual copies of a particular publication are distributed.

Readership is an estimate of how many readers a publication has based on the publishers’ own ‘readers per copy’ or ‘pass on’ calculation.

The Circulation and Readership figures together can legitimately form part of a ‘publishers statement’ within the ‘Media Pack’. However, a Readership figure alone can almost be considered a subjective figure and needs to be viewed with some caution. On the other hand, the Circulation figure can be confirmed by an independent audit such as those offered by BPA Worldwide (BPA), Audit Bureau of Circulation (ABC) and others.

Publications with independently audited Circulation figures, quite rightly, make much of the enhanced creditability this gives them.

Among the key information provided by the independent audit certificates is the breakdown of Circulation ‘type’ which is broadly split into 6 major categories as below:

But then, of course, there are many other things to consider before going any further such as; price, cost per ‘000, geographical breakdown, publication regularity (e.g. daily, weekly, monthly, annual), niche targeting, ROI’s etc. etc.……

……but that’s for another time.

JLA Media Ltd can assist you with your advertising planning. Drop me a line to discuss.