It was the beginning of summer when, from the sunny beaches of Glyfada, the maritime business regretfully said goodbye to a successful and exciting Posidonia 2016. In what seemed the blink of an eye we were scattered across the 13 halls and 90,000 square metres of the popular biannual German exhibition…another SMM (aka the ‘September Manic Month’) had arrived without notice….

Connecting the shipping industry on a global scale, SMM presents an outsize opportunity to listen as some of the biggest names shared view on the leading trends in the maritime business across a program of workshops, symposiums and seminars.

With over 2,200 exhibitors from 66 countries and the expansion of the site to include a 3,500m2 hall for eco-friendly propulsion, the 27th edition of SMM opened its doors to more than 50,000 visitors from 108 nations, cementing its position as one of the most international event in the 2016 maritime industry calendar.

‘Digitalisation in the shipping industry’ was the leitmotif of this year’s SMM, and the theme was also the main topic of the first ever pre-event Maritime Future Summit, held on 5th September. Here the true impact that the digital revolution is having on shipping efficiency, security and energy savings were brought home.

‘Smart shipping’, the term coined to describe the comprehensive network integration of ships and the smart use of data, was the talk of the vast exhibition areas. It was also the main topic at the Global Maritime Environmental Congress (GMEC), where Ronald Spithout, President of Inmarsat Maritime, explained how the fast broadband at sea available via Fleet Xpress is now driving the efficiencies onboard and ashore that are shipping’s new reality. 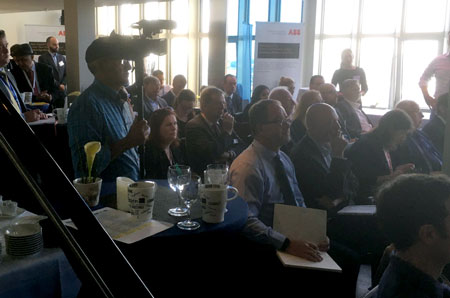 Networking events and receptions were in full swing on Day #1 of SMM.  Highlights included the spectacular reception hosted by ClassNK in hall B2, where new President and Chairman Fujiwara-san welcomed partners, press, and other industry representatives to enjoy the impressive Japanese Taiko drumming while indulging in traditional sake.

On the same day, visitors flocked to the ‘Dubai Networking Reception’ held at the UAE Pavilion and hosted by Dubai Maritime City Authority (DMCA), in collaboration with the Dubai Chamber of Commerce & Industry. The event offered media and industry professionals alike to get the story behind the rise of one of the world’s leading global maritime hubs.

On Wednesday morning, ‘early birds’ woke up to the press launch of the new ABB Linear Flow Azipod, the latest development in a propulsion solution which this year celebrated its 25th anniversary, but keeps on progressing. The breakfast event, hosted at the Radisson Blu Hotel Hamburg, was well-attended by no fewer than 40 German and international journalists who heard how fuel saving are achieved through the linear flow of the new Azipod propulsion unit, without compromising reliability, as well as how the latest version of ABB’s Marine Software will further improve ship safety and efficiency. 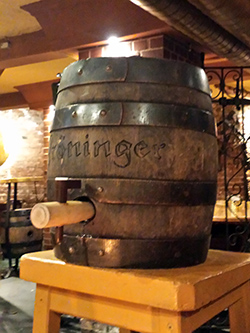 After more than 100 press interviews organised and attended and many miles walked through the halls of the German fair, the JLA team’s week ended with a lunch reception at the Simrad stand where press and colleagues gathered to meet Nicolas Queru, newly appointed EVP, MD Commercial Marine Division at Navico, and Stephen Davis, Simrad Global Brand Director within the marketing team.

In a schedule of product launches, receptions and press meetings that was not for the faint hearted, not to mention a Shell Marine workshop for owners, another JLA SMM sped by. Thankfully, traditional German food at the Groninger privatbrauerei and (less traditional) drinks at Molly Malone’s Irish pub were there when needed, providing the sustenance to survive the hectic hard miles, the late finishes and the early starts that make SMM a truly unique event. Auf Wiedersehen!